In addition to the Elite EzFrame that I was sent, I was also sent Elite’s new Cinetension electric screen. As with the EzFrame, the Cinetension is part of Elite’s new higher-end line, designed to meet the needs of the more demanding consumer. This is a tab-tensioned design, which the key part of this is the lack of waves/wrinkles. However, this screen is revolutionary from one standpoint…price. The Elite Cinetension screen retails for about what most other companies non-tensioned screens sell for. This is a big advantage for those looking for quality performance, but also are still budget conscious. I received my test unit in a timely fashion. The first thing I noted was the weight…62lbs. Now this is not an overly large screen that I used for testing, but it still weighed a substantial amount. This generally corresponds to a heavier duty unit. The box was about normal size for an electric, 8”x8”x~96”. The test unit I had was a 45”x80” as an aside. I opened the outside of the box and lo and behold another box! If you have read my reviews you know I love double boxing, especially with this sort of specialized gear. I should mention that in addition to the double boxing, the actual boxes were thicker than normal (corrugated cardboard, of course); very heavy duty. I continued on, opening the boxes. Inside, there was the screen. Surprisingly though it was double boxed, the inside protection was a bit scarce (see pictures). Basically there were 2 end cardboard protectors and then 4 thick foam wraps on the screen. I cannot comment on if this has proven to be sufficient, as I don’t know. But for a screen this size, compared to how some other companies’ internal packing looks, this was potentially a bit light in my opinion. Essentially delivery companies are having a lot of trust put into them to transport these carefully. From my experience, that could be dangerous. Again, it may have proven to work fine for Elite, but I just wanted to point that out.
Moving on, I took everything out of the box. As I mentioned, the screen had some serious heft to it. It was definitely a larger roller design (likely 3”), which tends to be the better type for supporting the fabric weight. Inside the box were a couple small accessory boxes, and a manual. In one box were the control parts. Perhaps the most impressive thing about this model is that though it is already priced well below the competition, they include both IR and RF remotes at no additional charge! This is often a $250+ option for many companies (just for 1 of them). Because of this, there is no hardwiring that needs to be done. You simply take the main control box, and plug it into the small 3-pin connector on the case. Then that box simply plugs into a standard wall outlet. Piece of cake. The only tricky part of hooking this up was hiding that control box somewhere. The case is big enough to hide it behind, but then you would have to extend it off of the wall a bit.
The other accessory box held the brackets. These were extremely thick aluminum. They allow for both ceiling and wall mount (I chose ceiling for the testing). They are also floating, which means you can slide them back and forth along the top/back channels to line up on your joists/studs…very nice. I hung my brackets onto the ceiling with 2 bolts straight up into the ceiling. I then simply lifted the case and hooked it onto the back channels. This then held it in place. Last, I simply tilted up the case and slid the specialized bolts into the top channel and bracket, tightened them down, and I was done. I should mention I did this all on my own so that is a sign of a good design (although again, it was a smaller size, so please don’t try it with the bigger sizes on your own).
I removed the small piece of packing foam that kept the batten from moving, grabbed the control, and dropped the screen. My first impressions were that the motor was about average noise level. The tab-tensioning system was very nicely done…the screen was as flat as could be (which you would expect). All the controls have up, down, and stop positions. This is nice such that if you want to change ratios, or adjust the amount of drop exposed (they have 2 options for that upon ordering), it is simple.

NOTE: I did not bother taking screen shots. Why? Well first, screen shots are only used as a basic idea and unless I did many screens with the same projector, they would tell you nothing. In addition, depending on the projector I used, that would more determine the resulting quality of the screenshots I did get. Essentially the camera can’t pickup the slight nuances of different fabrics.
The fabric that came with my unit was their High Contrast Gray. This was one of the darkest gray fabrics I have seen to date. I decided to test this with some lights on in the room. On the positive side, the darker gray color was very uniform, and really did well at lowering the black levels and combating the ambient light. The only thing I noticed was that the image wasn’t as bright as I would have preferred (mostly due to the projector I was using). But this should be brought up such that if you should choose this screen, please make sure to have a projector with adequate brightness. There is a slight texture to the material physically, however that really didn’t show up when an image was on the screen so not a problem. Overall the image was nice. This screen fabric really will shine for those rooms that have ambient light that is difficult to control. Yet it will still work well in darkened environments, and even help with the perceived contrast. I will mention the viewing angle was very wide as well, so that is good for rooms where the seating is spread across the width of the room.

If you are shopping for an electric screen on a budget, and really don’t want to chance a non-tensioned version, this may just be the screen for you. With lots of accessories, good build quality, and good performance, this Elite Cinetension offers a lot of bang for the buck.
Thanks! 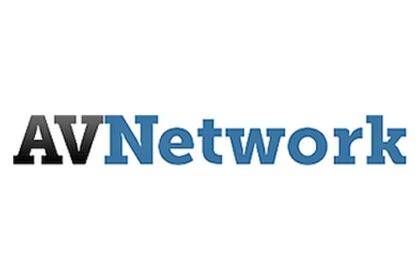 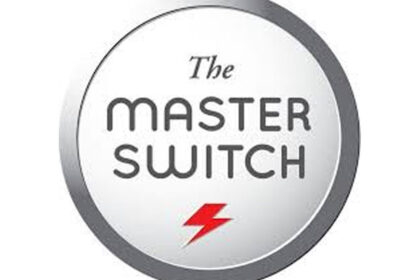 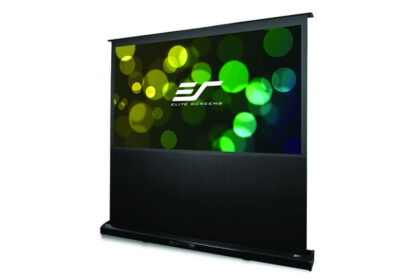 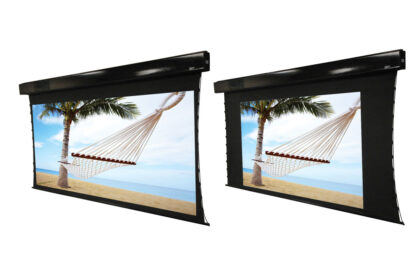 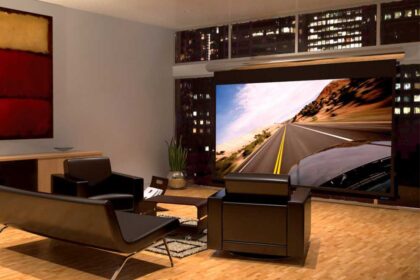 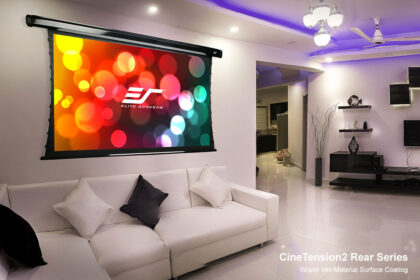