Amazon seems to lump the cinegrey reviews together. So my review is for the cinegrey 3D®. I bought the 135 inch cinegrey 3D® designer cut. I built a 54 by 96 frame for a 110 inch diagonal.
My frame consists of a face frame made from #3 1×4’s 8 feet long. These are pocket screwed in to a rectangle face frame that is then mounted to a base frame of 2×4’s on edge. The base frame gives my face frame a 3.5 inch pop out effect.
I built an edgeless designed screen. I wanted the pop out out so I could mount bias lighting behind. The bias lighting helps a bit with image overspill. I bought a $17 projector mount on Amazon, it makes getting the picture perfectly dialed in, nearly impossible. I’ll be watching for a deal on a peerless mount, and I’ll update my photos then. But for now, the image does not center perfectly on my screen.
On to the cinegrey. It does a fair job of rejecting ambient light. Bright scenes look good in a lit room. But even my super bright Epson 2040 really struggles with dark scenes. It could be a combination of poor LCD contrast ratio, and a dark colored screen. Dark scenes look fine in a completely dark room, but I would not want to watch them in a moderately lit room.
If you want to watch football or most animated Disney movies you will be happy with this screen material in ambient lighting situations.
I do not consider this a down side. I think for movies to be immersive, you need a completely dark room. So just watch movies at night or close off all the windows. But for football and those types of programming you’ll enjoy having lights on and still have a good picture. I’ll update my photos as I get better ones. For now I’ve posted a screen shot from the replacements. It was in a fairly well lit room. And a scene from back to the future in a mostly dark room, except for biased lighting.
As to construction, it went as expected. I sanded all my edges of my frame to give a slightly rounded over effect. I had zero issues with my fabric ripping. The fabric stretched well, and the screen surface came out perfectly smooth. My only stapler is a hammer tacker. These are for stapling roofing felt and house wrap. They are not designed for accurate stapling. So I stretched my fabric, and then held with one hand while I placed the hammer tacker where I wanted it. Then I sort of pinned the fabric with the tacker and hit it with a rubber mallet to drive the staple. This was a little cumbersome, but 95% of my staples fired exactly where I wanted them. The other 5% were not an issue.
The corners were difficult to get right. But it’s not real noticeable.
I’ll let my photos do the rest of the talking. I would buy this again. I paid the full Amazon list price. I think it’s a good value. I have under $175 in my full setup including biased lighting. The cinegrey base (non 3D) would probably be adequate for most folks. And it’s $30 cheaper. 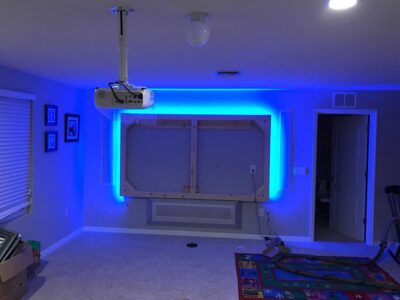 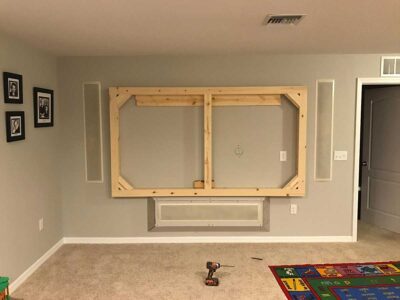 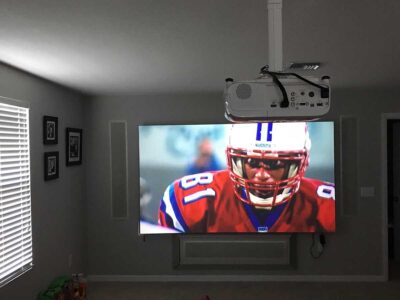 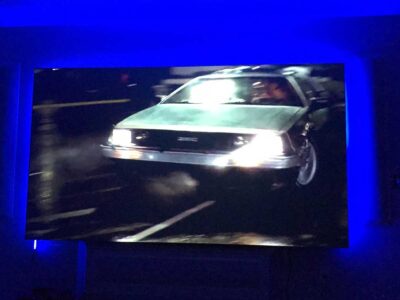 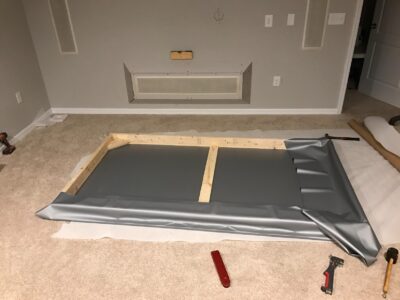